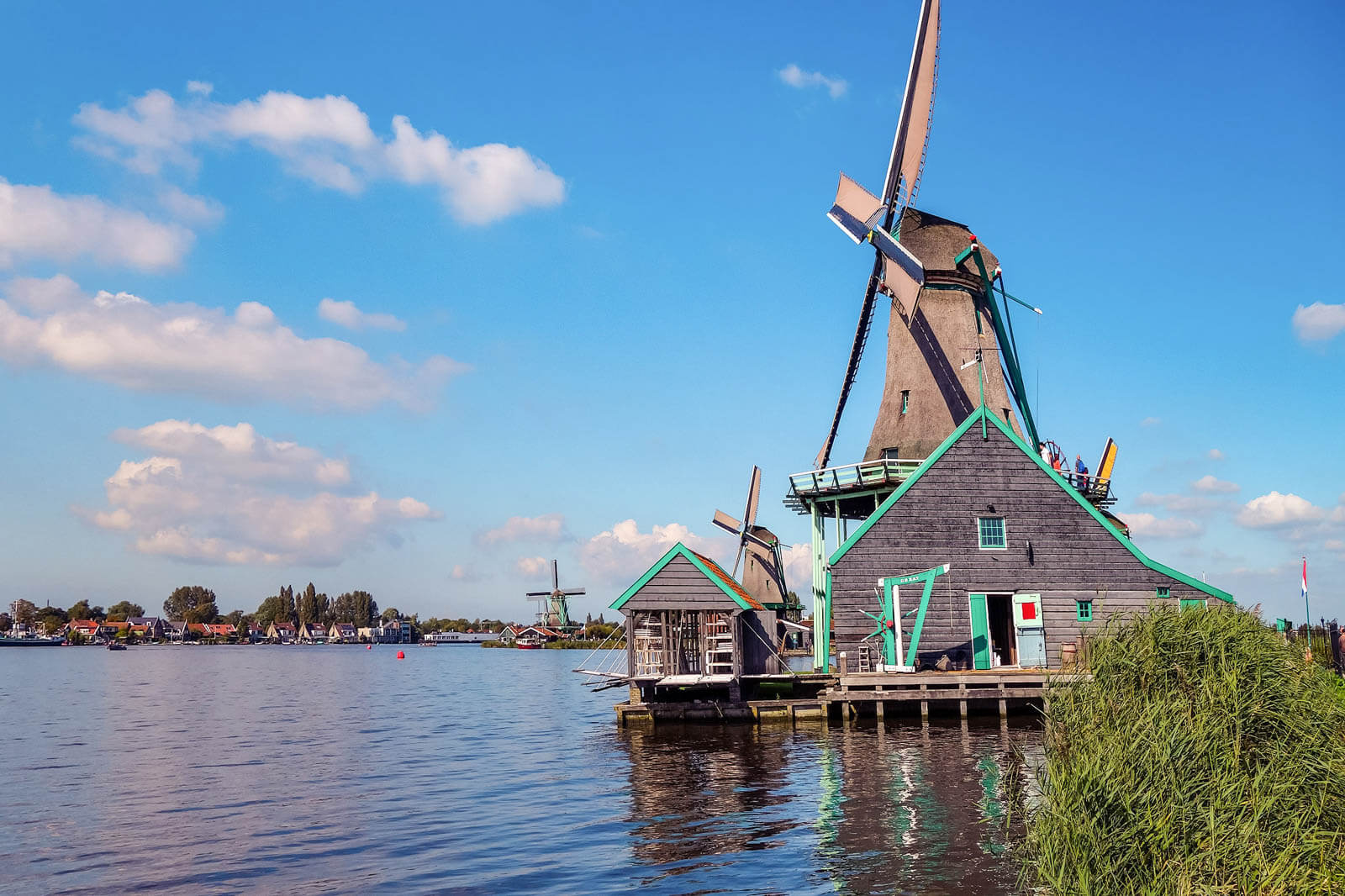 From Amsterdam to Zaanse Schans – The Perfect Day Trip

From Amsterdam to Zaanse Schans is a perfect day trip. The village is one of the most beautiful places you can see when visiting the Netherlands. And it’s not just the endless green fields and perfect blue skies or even Zaanse itself – it’s the atmosphere that you’ll fall in love with!

This quaint village is located just north of Amsterdam and is full of old–world charm. I was immediately taken with the small windmills, colorful houses, and historic buildings. It is a great place to explore and learn about the history of the Netherlands. If you are ever in the area, I highly recommend taking the time to visit this charming village, especially if you’re exploring things to do in Amsterdam in September. You won’t regret it!

How to Go from Amsterdam to Zaanse Schans 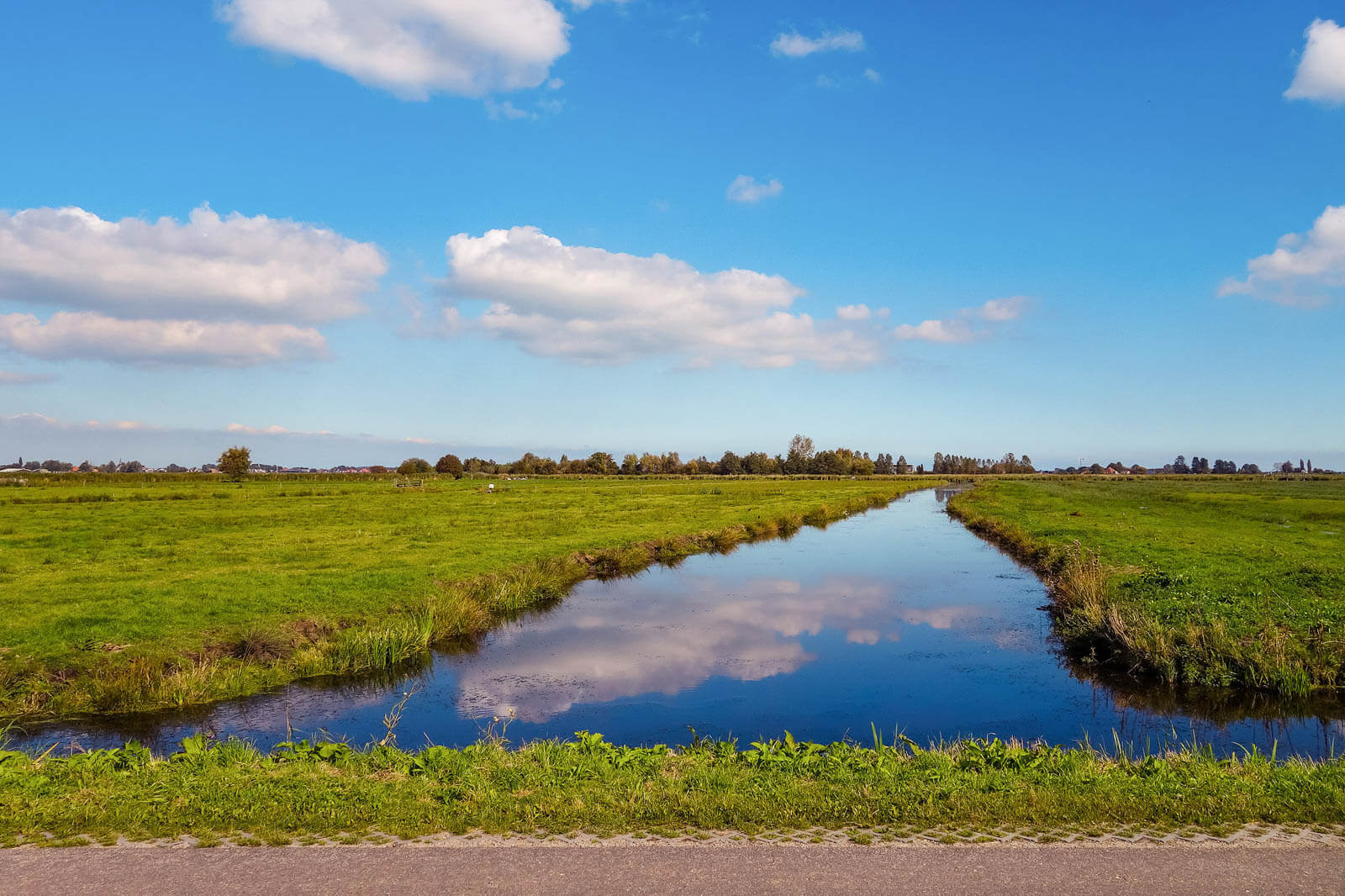 When you’re planning your visit to Zaanse Schans from Amsterdam, make sure to check the opening hours first.

You can also book a half-day trip from Amsterdam to Zaanse Schans – it’s super cheap (only like 30 EUR!), so it’s absolutely worth it to avoid the hassle.

The Windmills in Zaanse Schans 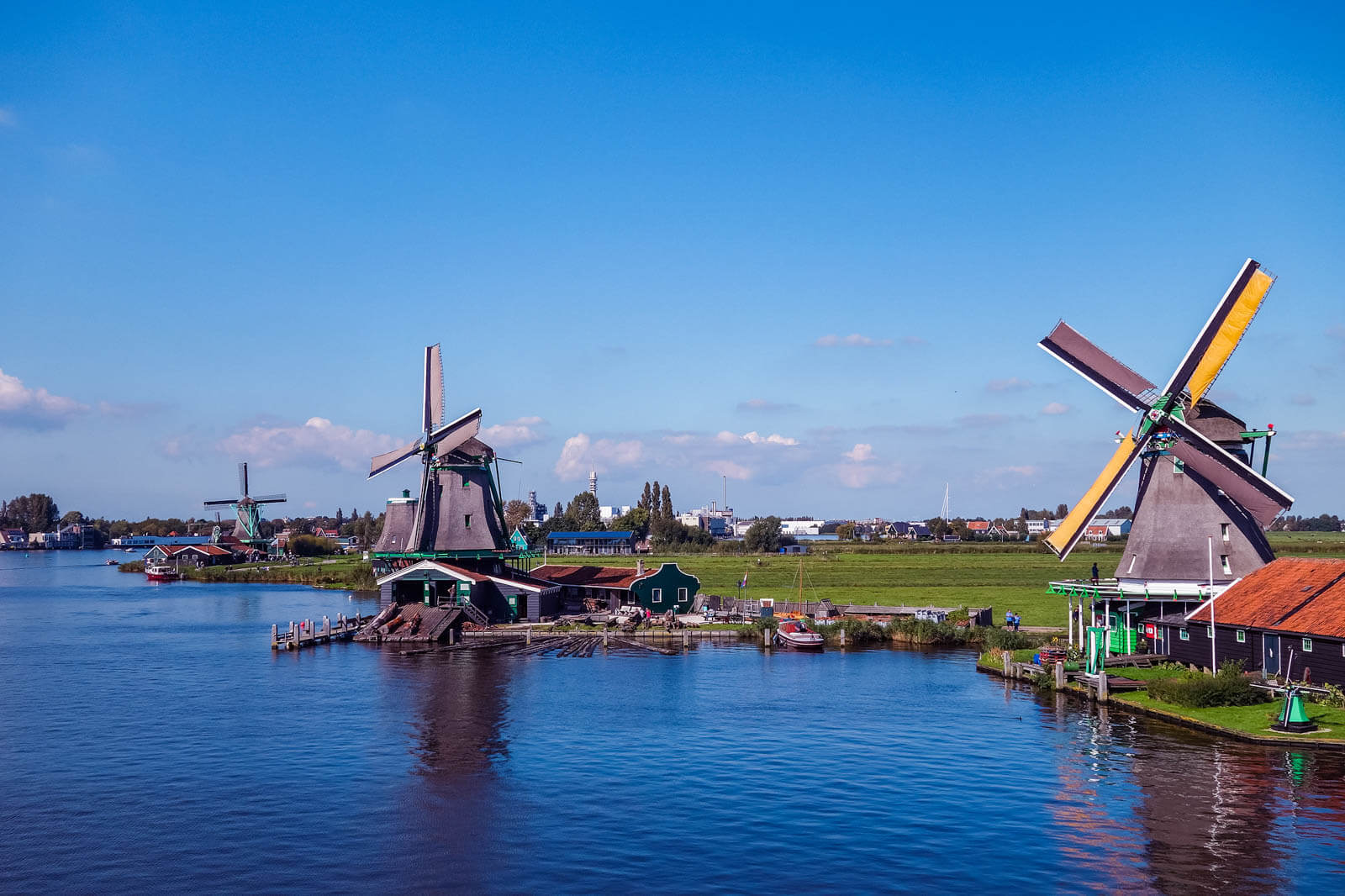 ​Contrary to popular belief, the the windmill was not invented by the Dutch. It was actually invented by a Greek living in Egypt very long ago – around the 1st century. Much later – in the 18th and 19th century the windmills became very popular in Europe, and especially the Netherlands.

The Zaan region used to be a home to over 600 active windmills once upon a time! Right now, there are only 10 windmills left that are operating – grinding spices, colorings and oil.

One of the best parts is that you can actually climb inside most of the windmills! You would only need to pay 4 euros as an entrance fee to a windmill in Zaanse Schans. But make sure to wear comfy shoes, since you are actually climbing steep internal ladders, which would be quite hard with flip-flops. Moreover, going down is probably more of an adventure than going up. However, once you’re up on the mill, you’re in for a treat – the views are just breathtaking!

The original Dutch wooden houses are one of the best attractions which I can’t miss in this Zaanse Schans guide! The curious thing about them is that they weren’t actually built there. Rather, they were BROUGHT there! One entrepreneur was so fascinated by them that he decided to collect them all in Zaanse. I know that some of them have been moved by boats but it’s still very hard to imagine moving an actual house! 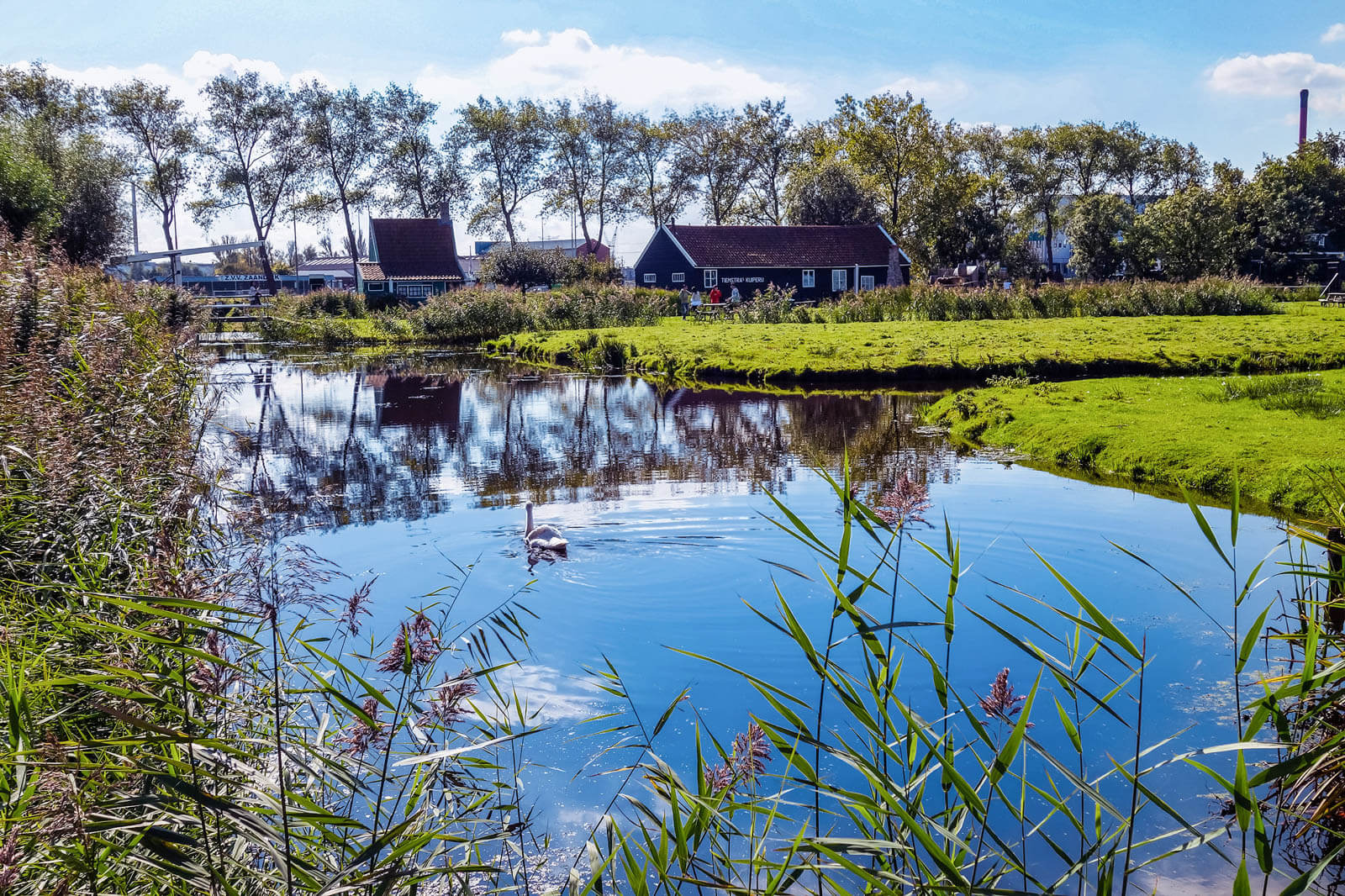 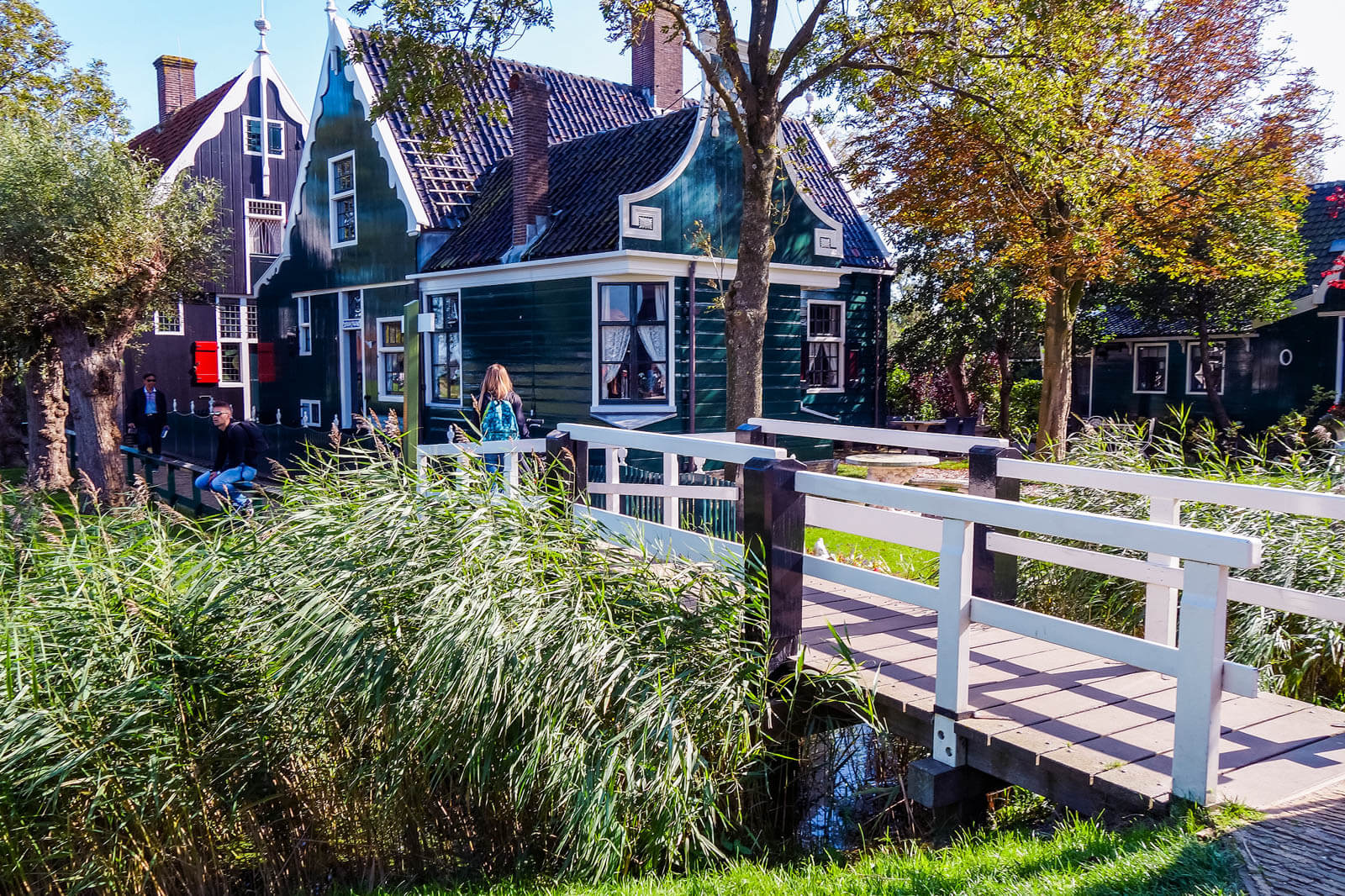 Again, if you’ve taken a guided tour from Amsterdam to Zaanse Schans, you’ll be able to see a demonstration of how clogs are made! The demo is only available for groups and it is a MUST! It was incredibly interesting, especially the end (no spoilers, though! I want you to be as fascinated as I was!!) 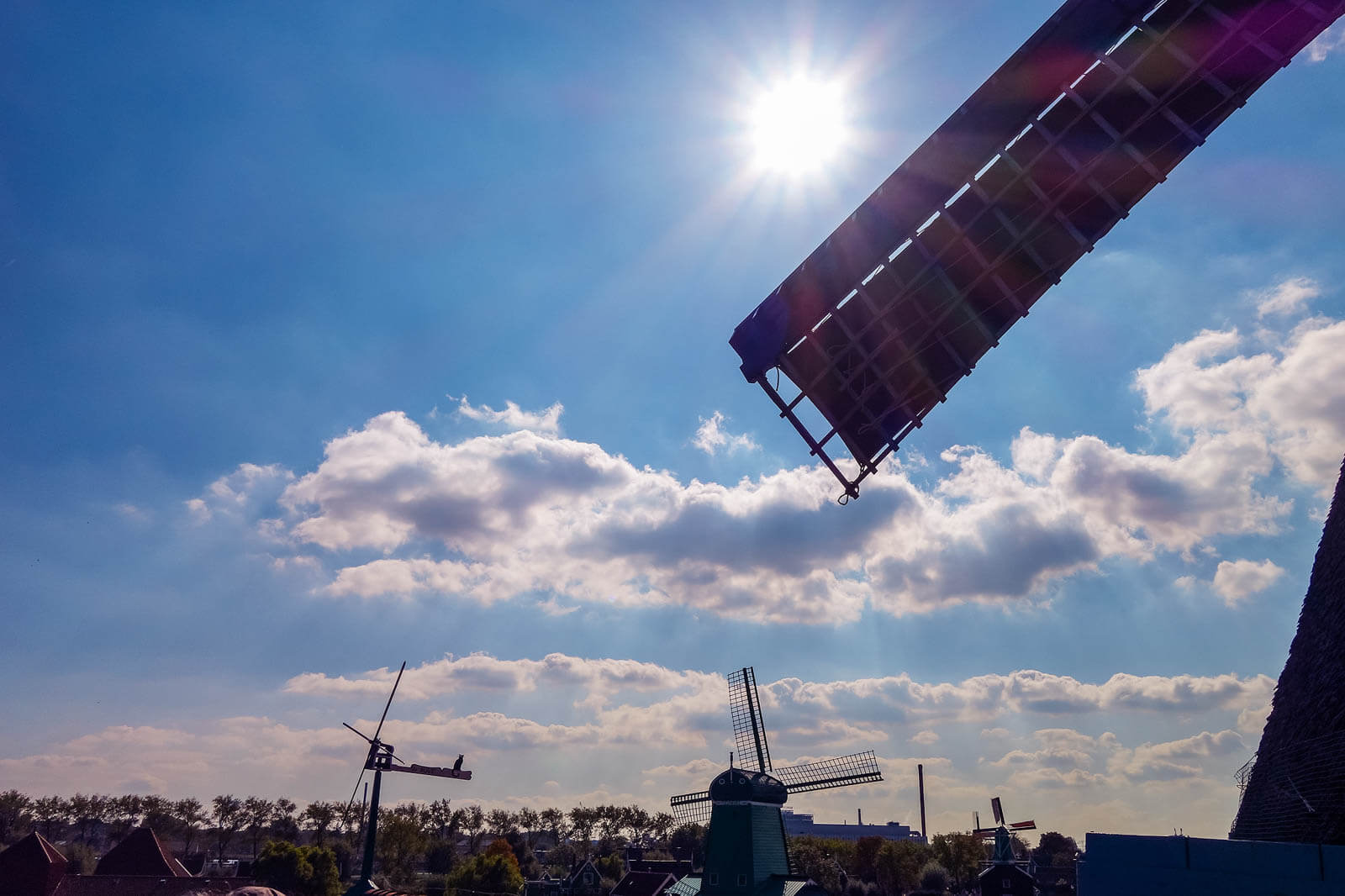 If you love the windmills and you enjoy the outdoors – there is no better way to explore the Zaanstreek region and the windmills than by bike! You can visit all 10 windmills on a 3-hour bike tour while (hopefully) enjoying a nice sunny weather. If you’re not in the mood for a bike – there is always a bus tour. But I’m sure it wouldn’t even be half the fun than to cycle along Zaanse Schans!

There are actually even a few boat tours available, which would be perfect if you are pressed for time and wouldn’t be able to do a bike tour in Zaanse Schans. 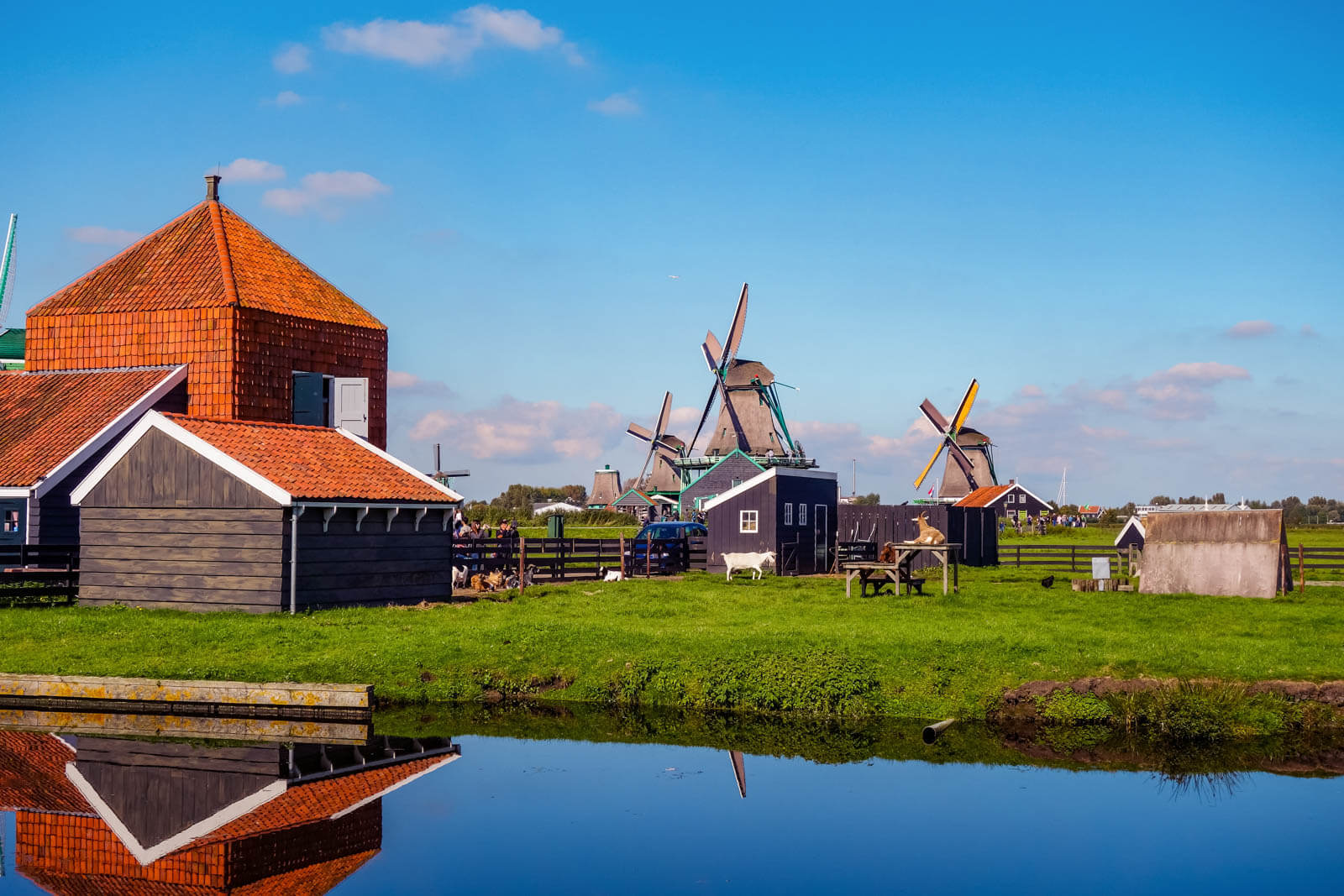 While you wouldn’t think Zaanse Schans would be a place housing awesome museums – it actually does have a few amazing places you can visit! Here is a list of all museums you can visit in this cute little village:

This is an interactive experience (especially if you’re like me and you LOVE pressing buttons!) inside an authentic operating factory for biscuits and chocolate! What a yummy place.
Entrance fee: 10 EUR

A hundred years before I was born, in 1887, Albert Heijn started maintaining their family grocery shop and thus began the history of the largest supermarket chain in Holland! The shop in the front of this museum at Zaanse Schans is the actual shop where the supermarket’s story began 🙂

Witness how the famous Zaanse sweet bread, Duivekater, is prepared and try some!

Upon entering this Zaanse Schans museum, you will be greeted by lots of clock chimes striking the hour. Explore some very old pendulum clocks and immerse yourself in the 17th century!
Entrance fee: 10 EUR

Have you ever wished you could take a photo with a Dutch traditional costume?? Then you’re in the right place! I don’t think there is a better way to fully immerse yourself in Dutch culture than wearing an 1850s costume in Zaanse Schans <3

It’s kind of hard to see the full beauty of the Zaanse Schans windmills up close. Thus, visit this cool museum with scaled models of windmills!
Entrance fee: 4.50 EUR

Looking to explore more of Amsterdam itself? Check out this awesome post about the most fun things to do in Amsterdam!

If you’re spending a whole day in Zaanse Schans (highly recommended!!) you can get the Zaanse Schans Card for 15 EUR. You’ll get free entrance to a few different museums as well as discounts in some of the shops!

So what do you think? Isn’t Zaanse Schans the perfect magical day trip from Amsterdam?

11 Awesome Things to Do in Amsterdam in...

Have the Most Fun in a Day with...

Now that I live in the Netherlands I gotta get here. I am still in love with windmills even though they really are everywhere in this country!

Hehe yes!! You should totally visit this lovely place. And make sure you’re hungry before you go, that cheese is AMAZING :))

Beautiful photos! It looks so picturesque. Would love to visit Holland again.

Thank you so much, Alma! I’d totally visit too, especially in the spring <3

Oh my, what an incredibly cute and photogenic place! Those windmills are adorable x

Thank you, Amy! They were really cute indeed! And I really enjoyed going inside one, felt like I was transported a hundred years back in time 🙂

Great post! im looking for things to do when Im in the netherlands for traverse in may! I’ll add this to the list!

Awesome!! Yes, you should really visit it and you won’t be disappointed at all 🙂 Ah, wish I could join you for Traverse 🙁

I’m so embarrassed that I’ve lived in Amsterdam for 4.5 years and still not been to Zaanse Schans! I need to correct this 🙂 Gorgeous photos – you clearly had a great sunny day (not a guarantee!)

Indeed it is!! It was such a lovely experience <3

I’ve never even heard of Zaanse Schans but it looks so gorgeous and very relaxing (I love all the water surrounding the town!). You had me sold at the cheese farm 😉

Haha it offers some of the best views around! And yeah, that cheese is too amazing not to try! And they have so many different types, yummm! 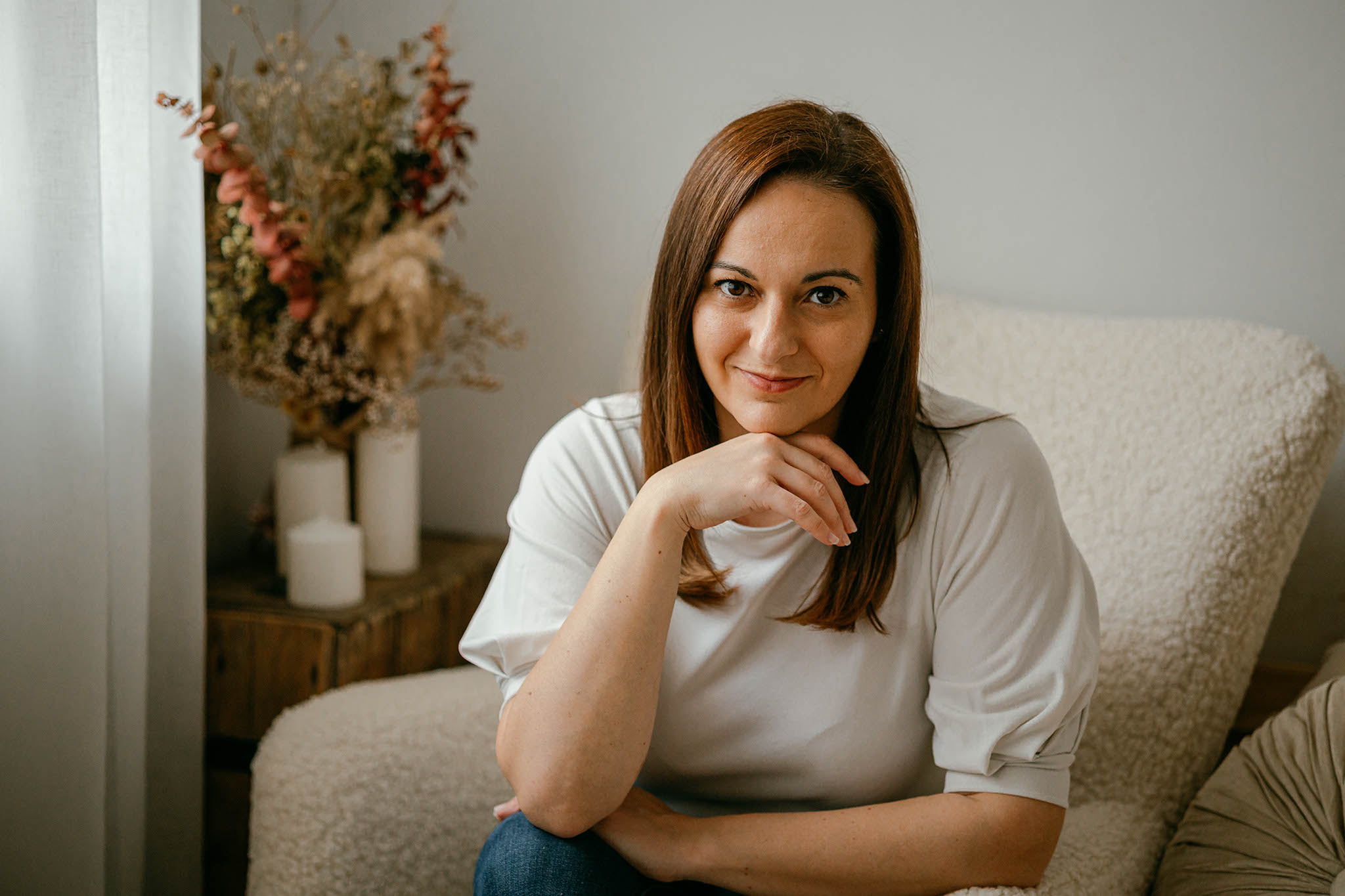 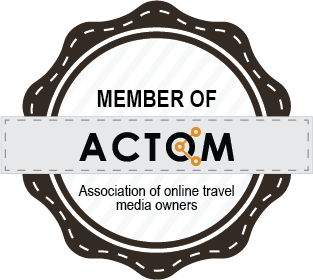